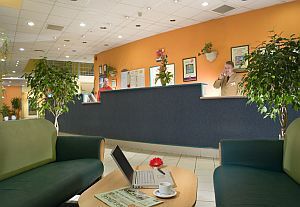 Hotel Ibis Budapest Vaci ut *** Ibis Hotel Budapest
Dear Guests, we are sorry to inform you that the Hotel Ibis Vaci Ut is closed from the first of November 2011. We recommend the Hotel Ibis Heroes Square in five minutes distance.

Ibis Budapest Váci út is situated on the Pest side of Budapest, near the Western Railway Station, at the junction of Váci út and Dózsa György út and at the "Dózsa György út" stop of undergound M3.
Last total renovations: in 2001.

By public transport: Take underground M3 or trolley No.75 or 79 to Dózsa György út.

Table Restaurant: offers the masterpieces of the international and Hungarian cuisine consistent with the Ibis standard. In the morning rich buffet breakfast is awaiting the guests.


Prices per room/night. The prices include the accommodation, but do NOT include the breakfast and taxes.
VAT: 18%, city tax: 4% of room rate.
Ibis Budapest Vaci ut offers free WiFi Internet connection in all public areas and guest rooms.
Breakfast: 7, 65 Eur/person.
Extra bed: 20 Eur/night
All major credit cards accepted

You can change or cancel your reservation with no penalty until 6 PM (hotel local time) on the date of arrival. In case of late cancellation or no show the first night of the accommodation cost will be charged automatically by the hotel.

More hotels in the city