Most 3-star hotels in Budapest and Hungary are Ibis hotels, owned by Accor Hotel Group. Most of them are new or renovated. Hungarians and foreigners are fond of these hotels because the prices are low and the level is high. Lots of them can house business talks and conferences. There are 3 star hotels in Budapest's city centre and in the green belt too. Most of them have non-smoking room and are equipped with colour TV, bathroom and mini bar.

Budapest
Special offer! Free night: 7 = 6 !
from EURO 25! The three-star City Hotel Unio *** is located in the centre of Budapest, in the commercial and business district of the city. Many famous buildings and sights can be reached within 10-20 minutes from the hotel. City Hotel Unio offers comfortable, air-conditioned rooms exceeding the level of three-star hotels. The family style restaurant serves Hungarian and international dishes. Parking: in covered and guarded parking house 40 metres from the hotel.

Budapest
Special offer! Free night: 7 = 6 !
from EURO 57! The Hotel Anna Budapest is located in a quite environment, near to the metro stop in the XI. district. waiting for its guests. The building has 37 double rooms with unique equipments, 11 exclusive single rooms and one apartment. Mimama Konyhája is a family restaurant next to the hotel, which makes Hungarian cuisine for the guests.

Budapest
from EURO 55! The Jagello Business Hotel is located on the Buda side of Budapest, in the vicinity of the downtown with excellent public transport facilities. The 3-star hotel is a highly recommended place for traveling businessmen: direct dial telephone, free Internet access, fax, etc. are available for the guests. The most important sights and the business centre of Budapest can be reached in 15-20 minutes from the hotel. 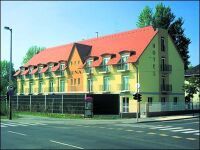 Budapest
Special offer! Free night: 7 = 6 !
from EURO 40! The 3-star hotel Luna, built in 2001, is situated in Southern-Budapest, on the Buda side of Budapest. It’s a convenient point for both tourists and business people visiting Budapest. The hotel has a private car park and a conference room. Conference facilities serve up to 50 persons.

Budapest
from EURO 52! The 3-star Alfa Art Hotel is located in Budapest directly at the bank of River Danube in a still natural environment in Obuda. In the renovated Alfa Art Hotel 42 air-conditioned rooms, an own restaurant and terrace as well as 5 modernly equipped conference and meeting rooms are at the guests' disposal, so the hotel is the ideal venue of conferences, team-building trainings and weddings. 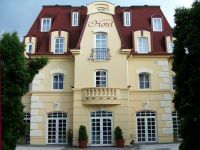 Budapest
from EURO 47! Hotel Walzer is located on the Buda side of Budapest, in green and quiet surroundings but even close to the city center. The 3-star renovated hotel offers its guests single, double and triple rooms in a building outside like a country mansion. For a complete relaxation experience sauna, fitness room and massages are at guests’ disposal. 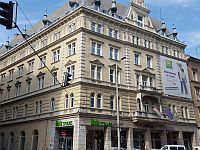 Budapest
Ibis Styles Budapest Center is a fully renovated 3 star hotel located in the bustling city-center of Budapest. This hotel, which has 130 rooms, 2 meeting rooms and a snack bar is suitable both for business and leisure travellers. An unforgettable experience - welcoming, cosy athmosphere together with a taste of the continent's first underground with decorating symbols of the stops in the lobby and on the corridors.

Budapest
The Ibis Styles Budapest City is situated on the Pest side of Budapest, close to the city centre. Non-smoking rooms and rooms with panoramic view to the river Danube are awaiting the guests. 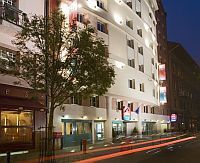 Budapest
from EURO 45! The 3-star Hotel Ibis budapest Centrum*** can be found on the Pest side of Budapest, just 5 minutes walk from the business and cultural centre of the city, with in-house garage. Excellent for businessmen and tourists.

Budapest
from EURO 49! The 3-star Hotel Ibis Aero is situated in one of the growing business districts of Budapest. This is the nearest hotel to the airport, with free and pay-parking with security guard. The own garden guarantees a pleasant atmosphere throughout the year. 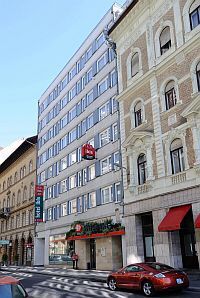 Budapest
The 3-star Hotel Bara*** is a centrally located hotel, yet in the lush green belt of Budapest. Hotel Bara offers 84 comfortable rooms, from single rooms to apartments and an underground garage for 80 cars. The hotel has 6 conference rooms for up to 450 persons. Budapest, centre, hotels, 3-star hotels, cheap hotel, Hungary, online booking. 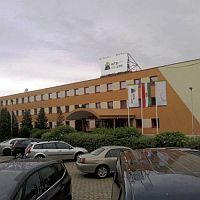 Budapest
3-star Hotel Bestline awaits its guests in the building of former Hotel Frankfurt in Budapest. Because of its location Hotel Bestline can serve as an ideal destination for through-passengers, guests who are in need of some rest after long hours of driving or for the ones who would like to spend some pleasant nights. In the hotel there are 86 air-conditoned rooms from single rooms to four-bed rooms. Wireless Internet is available for free both in the rooms and the in common areas. 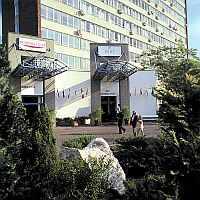 Budapest
Hotel Griff - 3 star hotel with 108 rooms in pleasant environment on the Buda side of the capital, with easy access to all tourist attractions. Ideal for groups and individual travellers. Green Hotel 2003. 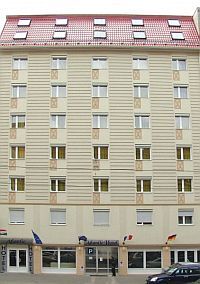 Budapest
The 3-star Hotel Atlantic is located in the heart of Budapest, in the vicinity of the pulsating life of the city, however guests are awaited in a friendly and quiet ambience. Hotel Atlantic is with large, comfortable rooms, breakfast room and closed parking lot at the guests' disposal, so the hotel is ideal accommodation solution both for tourists and business travellers. Due to its central location the sights and the business centres of Budapest can be reached in few minutes from the hotel. 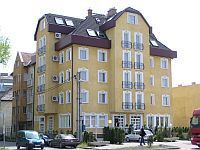 Apartment  Budapest
Special offer! Free night: 7 = 6 !
from EURO 44! The 3-star Hotel HAPPY Apartments *** situated about 4 kms from the downtown in Budapest offers 20 different-sized apartments, from 35 m² up to 80 m². The apartments with larger ground floor have 2 independent sleeping rooms. Each apartment has top-level and practical furnishment, air conditioning and well-equipped kitchen. The apartment house has an underground garage where guests can find safe place for their cars.

Budapest
from EURO 41.94!  The totally renovated 3-star hotel ibis Budapest Heroes Square is situated at the green heart of Budapest, in the City Park, next to the world heritage Heroes Square, the restaurant Gundel, the Zoo and Botanical Garden, the Amusement Park and the famous Szechenyi Spa. You can get the downtown in 10 minutes walk along the historical Andrassy street. The hotel welcomes its guests with 139 air conditioned rooms and a garage. 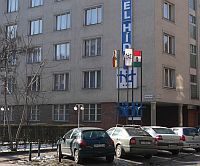 Budapest
The 3-star Hotel Hid is a familiar city hotel in the 14th district of Budapest, just 5 minutes from the Puskas Ferenc Stadion and the Budapest Arena. The hotel – after a full renewal in 2004 – offers 32 rooms for the guests. Hotel Hid is an excellent starting-point of sightseeing tours in Budapest because the most important sights as the City Park, the Széchenyi Baths, the Museum of Fine Arts, the ZOO, the Vajdahunyad Castle and the Heroes’ Square are situated just a 10 minutes walk from the hotel.

Budapest
Hotel Pest Inn *** superior is situated in Budapest, only a few kilometers away from the Liszt Ferenc International Airport of Budapest. The hotel awaits its guests with 78 standard rooms, own restaurant and event room. Thanks to its location, near the Üllői road and the underground station, the renovated Pest Inn Hotel is a perfect accommodation solution for both businessmen and tourists.

Budapest
Gerand Hotel Eben is located on the Pest side of Budapest, near the Budapest Fair Center (Hungexpo). All of the 99 non-smoking rooms are air-conditioned and free WIFI Internet connection is available for the guests. In the hotel restaurant fine dining experience awaits the clients from the international and local cuisine. The success of events is guaranteed by the 6 different conference rooms equipped with all technical facilities and by the professional staff.