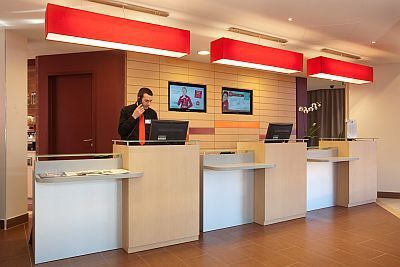 Location:
The 3-star hotel -with its own garden- is situated next to a shopping mall in one of the growing business districts of the city. Downtown Budapest is within easy access. This is the nearest hotel to the airport. The own large garden and the small forest behind the hotel guarantees a pleasant atmosphere and fresh air throughout the year.

By car: From Vienna: motorway M1-Erzsébet Bridge-Üllői street. From East (Debrecen, Ukraine): road 4. Pay-parking with camera surveillance for cars and buses is available.

By public transport: take underground M3 in the direction of "Kőbánya-Kispest" and get off at "Határ út".

Ibis Budapest Gastronomy: In the morning rich buffet breakfast and fast breakfast from 4:00 until 6:30 a.m. await the guests.

The Bar is non stop open. Snacks, sandwiches, hot and cold beverages are available 24 hours a day.
HACCP-system: from 2001.

Other hotels in Budapest operated by the management:

Guarantee policy: In order to guarantee your reservation for arrival after 2pm please inform us of your credit card details and expiry date. Without credit card details the reservation is on non-guaranteed basis. Cancellation policy: Modification or cancellation is accepted until 2pm hotel local time on the date of arrival without any charge. Beyond that time 1 room night will be charged.